I have now had three out of my five swimming lessons. The fourth one is tomorrow and the last one on Monday. I can honestly say I barely remember the first lesson but I think that’s a good sign. Because we’ve been building on things I learnt in that lesson each time, and every time we do, those things become more and more natural, gradually easier the more I do them. And because I took the advice of the people teaching me and booked the lessons with only a few days’ gap between them, muscle memory is kicking in and that’s making the whole experience a bit easier for me too 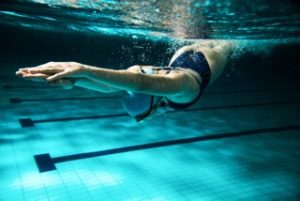 arms – only underwater until the final lesson. After that we added in the ‘push and glide’ movement for extra momentum and also worked on the breathing rhythm as well as making the breathing out more ‘explosive’. In my most recent lesson we addressed rotation. That was, for me, when it all started to come together and feel more like the front crawl I recognise. Up until that point the elements had been so broken down into small parts that I sometimes felt as though five lessons wouldn’t be enough. I was worried I wasn’t progressing fast enough or well enough. I had nothing and nobody to compare myself with. Often my instructor would be amused to hear a cry from the middle of the pool – “I don’t even feel like I’m moving at all!” This isn’t helped by wearing four floats on each arm.  But he explained to me that it’s essential to slow me down and for him to see more clearly where I’m doing well and where I can improve 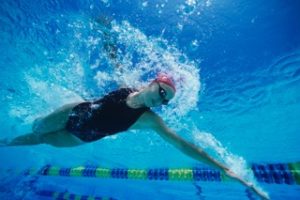 And I have to say I’m finding the process satisfying. And I can see clear parallels with clients who come to me for hypnotherapy. It’s all very well turning up because you’ve put the time aside and paid for the session, but there is so much more to it than that. It’s about committing fully to the process. It’s about not giving up if it doesn’t work at first. It’s about determination and courage and perseverance

So if there’s something I can help you overcome, something that you think might be holding you back in your life, why not email me at caroline@carolineadamshypnotherapy.co.uk, or give me a call on 07775 860043